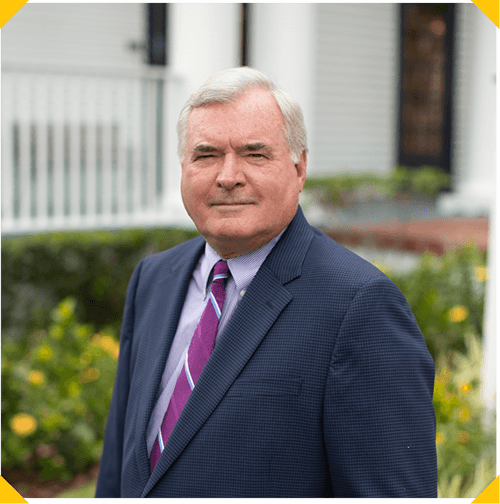 Timothy G. Anderson graduated with honors from Jacksonville University in 1971 and the University of Florida College of Law in 1974. He grew up in a casualty insurance environment, his father being a State Farm Insurance divisional superintendent.

In 1975, after one year of defending insurance companies, he began exclusively representing individuals injured by the negligence of others. His clients included victims of automobile, truck, premises liability, professional negligence and product liability accidents. Mr. Anderson was lead counsel in hundreds of personal injury trials and was Board Certified by the Florida Bar in the field of Civil Trial Practice since 1983.

He was recognized as a Top 100 Lawyer by the invitation-only National Trial Lawyers and selected for inclusion as a Super Lawyer. Tim was included in Tampa Bay Magazine as one of Tampa Bay’s top lawyers and held the highly prestigious AV preeminent rating* by Martindale Hubbell.

The state of Florida has more than 93,000 lawyers. In 2013, Mr. Anderson was recognized by the Florida Bar as one of only 221 outstanding lawyers who had achieved 30 or more years of continuous board certification. Only 23 of that number called Tampa home.

During his high school years ,Mr. Anderson was a dedicated athlete playing a variety of sports, including basketball and baseball. He earned a full scholarship to play both of those sports at the collegiate level. That background led to many years of coaching in a variety of youth leagues in the Tampa Bay area. When not participating, he avidly supported the USF Bulls, Tampa Bay Rays and the Tampa Bay Lightning, in addition to his alma mater.

Tim was a member of American Legion Post 273, Madeira Beach, having served in the United States Army before law school. He was also a member of Palma Ceia Lodge 290 F. & A.M. and the Egypt Shrine in Tampa.

Mr. Anderson and his wife of over 36 years, Carole, had one daughter, two sons and three grandchildren. The Andersons are longtime members of Hyde Park United Methodist Church.